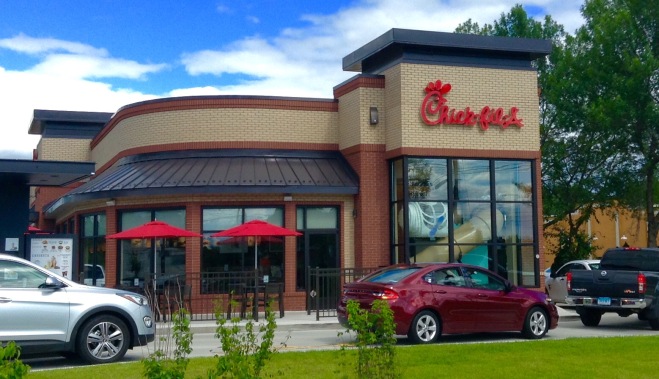 Lauren, Miles, and I were out running errands yesterday. Our tummies were all starting to rumble and were excited to see that a Chick-fil-A across the shopping center.  The last few times we went had been through the drive-thru. The kid had just taken a massive poop and we needed to change his diaper. So, we definitely opted to go inside.

When I got into the men’s bathroom, I was instantly excited. There was actually a changing table, which especially isn’t a given for a men’s bathroom. There was also spare wipes, spare diapers, and a stool for little kids to be able to reach the sink.  What kind of magical parenting paradise is this?

We got to our table and one of the employees offered to get us a clean high chair, which was puzzling to us. The one that was there was barely used. But the clean one came with hand wipes and placemat for the kid that stuck to the table. It’s like there’s someone at Chick-fil-A that’s actually been the parent of a young kid before.

Plus plus plus… the meal is decently healthy. It included grilled chicken, a fruit cup, and a bottle of reduced fat milk. I don’t feel guilty giving this to my kid, like every other fast food place. And it included an age appropriate toy. It was a book for kids 2 years and younger. 😀

And if all that wasn’t enough… there was an option, where you could order through the drive-thru and then one of the employees would setup a table with your food. You’d park and then enjoy the lovely meal inside.

At any given lunch time, you go into any Chick-fil-A and it’s HOPPING. Go into any other fast food restaurant and it’s up-in-the air, whether it’ll be a ghost town. I’m sure some CFO would cringe at the cost of all the extra amenities that Chick-fil-A is offering. But it’s the difference between in my relationship with Chick-fil-A and anywhere else.

With anywhere else, it’s just a transaction. I give you money. You give me food. But especially when you have a family, it’s never just about the food. The food is one of a hundred things thats running through my mind. If a restaurant can take 20 of those things off my plate, I get to actually enjoy the experience that much more.  Dang Chick-fil-A chicken sandwiches are good.  It’s like they’re on my side. And they’ll in the end get more of my money.

One thought on “No wonder Chick-fil-A is always busy.”